You are here: Home / Archives for Improv

The second to last Mustache Rangers improv show, performed during the Twin Cities Improv Festival held at HUGE Theater, was lovingly recorded and edit by Fes of the Webcast Beacon Network. 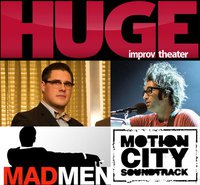 The article really gives a feel for what a Mustache Rangers live show show is like, it’s characters, and how it comes together. If you have ever been at a loss for words when telling your friends about the Mustache Rangers, you can scoop up some of Max’s words and put them into your mouth to help you out.

We would like to thank Max for the very excellent article. And we would like you, reading this. Yes, you. We can hear you breathing. We would like you to pass on this article to anyone you’re trying to convince to see our show. And, of course, read it yourself. And read Max’s other articles at MinnPost.