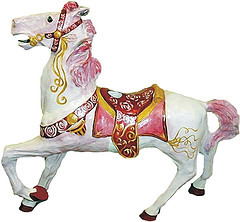 The horse (animalus overratedus) is a thing with four legs and a head and a tail. It was invented in 5000 BCE by this guy that was real lonely and needed a friend. So he invented a horse, but he gave it too many legs and it ran away. He was real sad, so he made another horse but he put stripes on it so it would know it was his prisoner. That is how the zebra was invented. The zebra kicked him and killed him and then ran away.

Guys figured out how to climb trees in 4001 BCE, and by 4000 BCE they were jumping from trees on to horses. So the horses agreed not to be jerks anymore if people would stop jumping on them. The guys agreed, but kept jumping on horses. The jerk role had switched to guys instead of horses, and guymanity was on its way to greatness.

Guys eventually forgot how smart horses were, and started to use them mainly for jumping into pools from diving boards. One horse, named Clever Hans, knew how to do arithmetic. But when guys figured this out, the other horses were all like “dude, stop doing maths.” Then scientist guys said Hans was stupid and horses were free to get brushed and eat apples and sugar cubes.

Zebras are still on the lam.