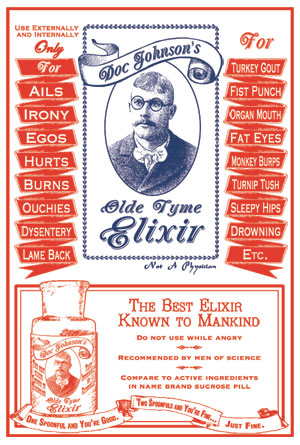 While not necessarily inevitable, the Doc Johnson’s Olde Tyme Elixir t-shirt is as much a reality as diapers that can be pulled upwards are.

Doc Johnson was feeling generous, for once, and is allowing his t-shirt to be PRE-ORDERED at a discount. Be aware that the t-shirt has unsubstantiated healing abilities, just like Doc Johnson’s famous elixir. If it’s unsubstantiated, you know that it’s good.